Under General Manager Peter Gelb, the Metropolitan Opera has continued and reaffirmed the Met’s long history of groundbreaking relationships with major visual artists—such as Marc Chagall and David Hockney—while fostering new opportunities for collaboration. Initially, when Podwal was asked by Gelb to create art to be reproduced for the Met Opera Shop, Podwal painted a series of Mozart portraits portraying Mozart as characters from his operas. The series was published as a boxed set of notecards. Next, Podwal created limited edition archival print posters for nine of the Met’s seasons. The first poster was for Nabucco, sometimes called Verdi’s “Jewish Opera.” Podwal’s other Met Opera posters were for Mozart’s seven most famous operas. 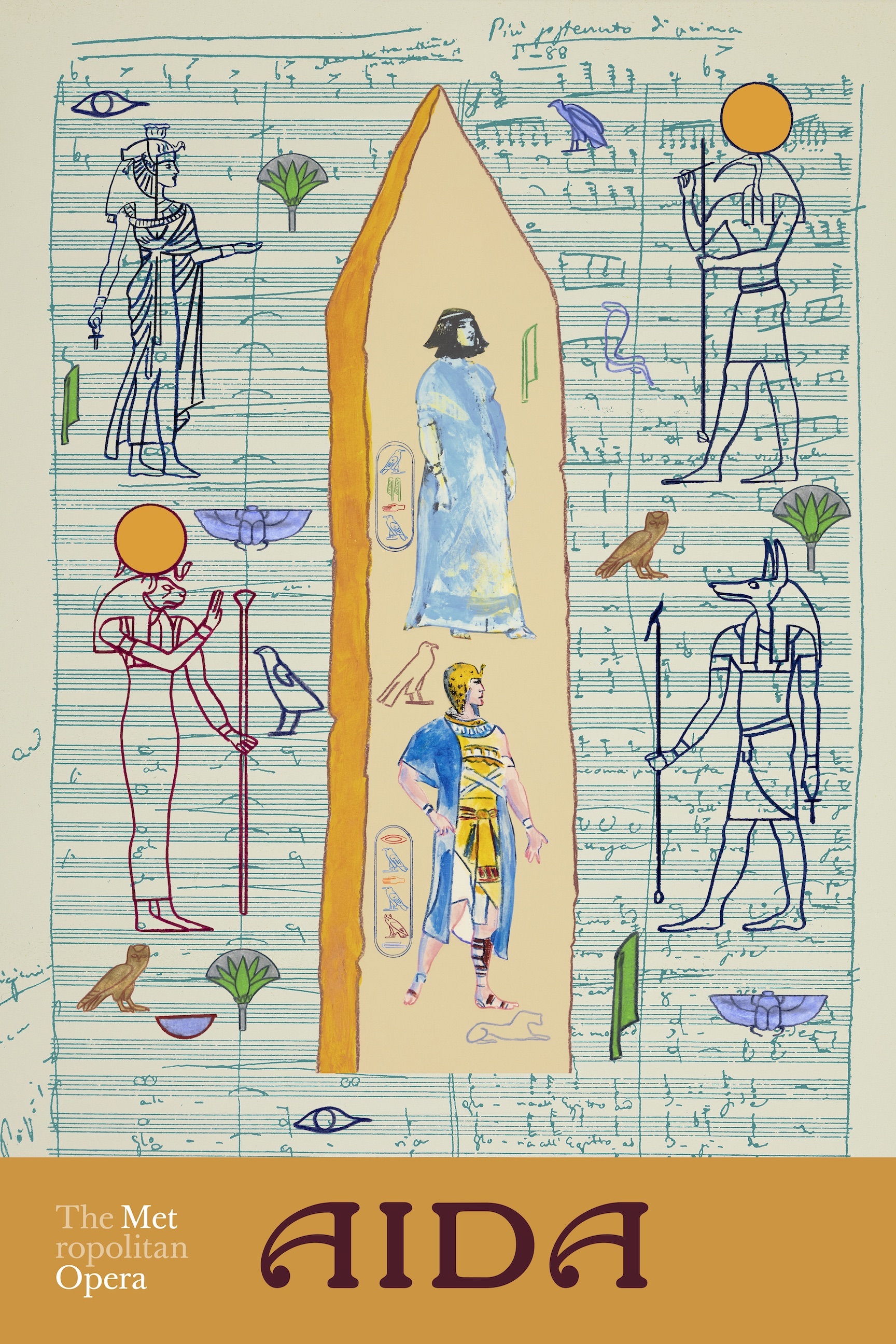 Against a background of Verdi’s handwritten score from the second act finale, the artwork features an obelisk decorated with the opera’s main characters, Aida and Radamès. Cartouches alongside the two portraits spell each name in hieroglyphs. Images of Pharoah’s daughter Amneris and Egyptian gods surround the obelisk. 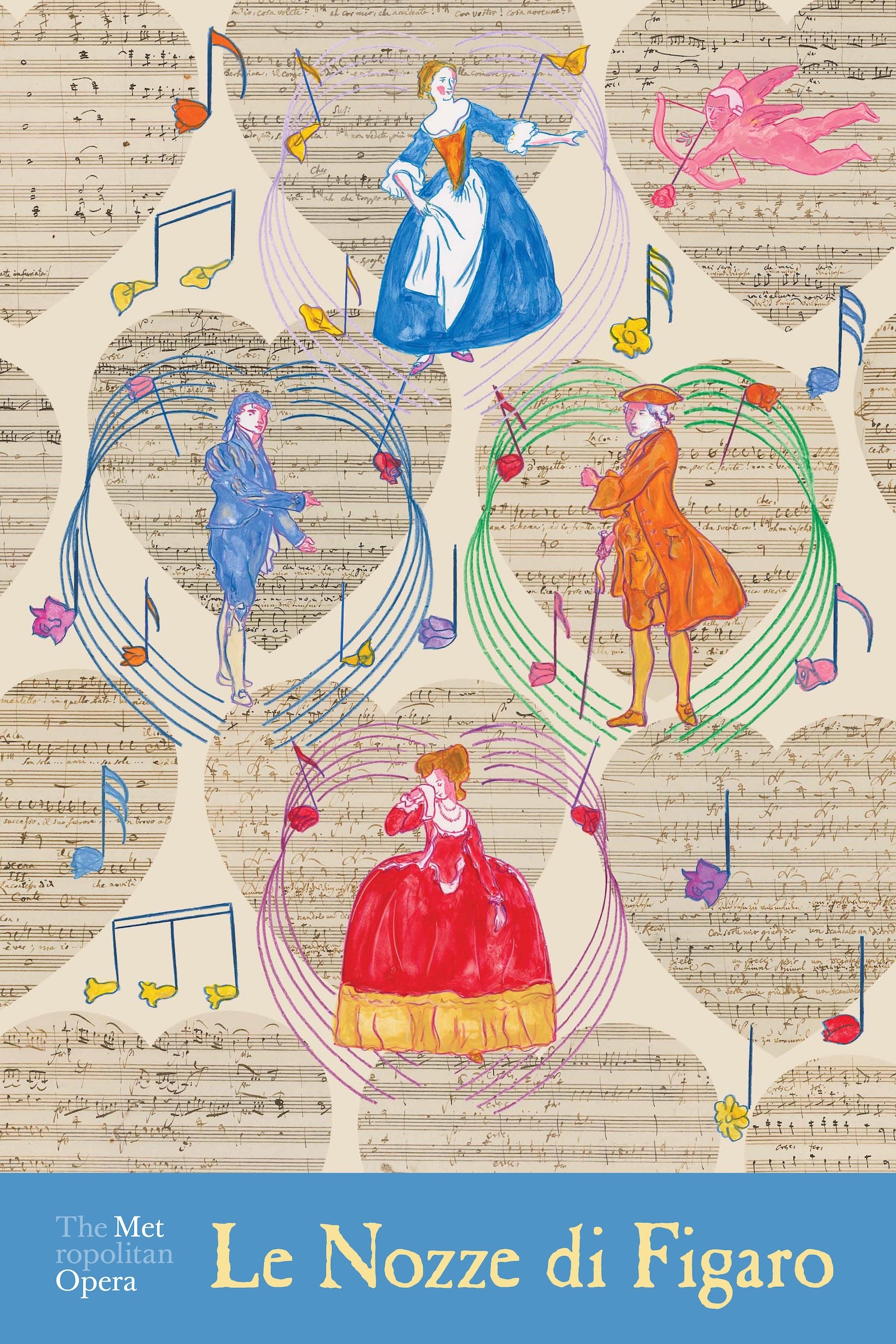 The four protagonists of Mozart’s opera—each a captive of a heart-shaped music staff. The composer, portrayed as a cupid, shoots flowers at the characters. Evoking the opera's comic romance, the musical notes are represented as flowers. A backdrop of hearts further visualizes the storyline. 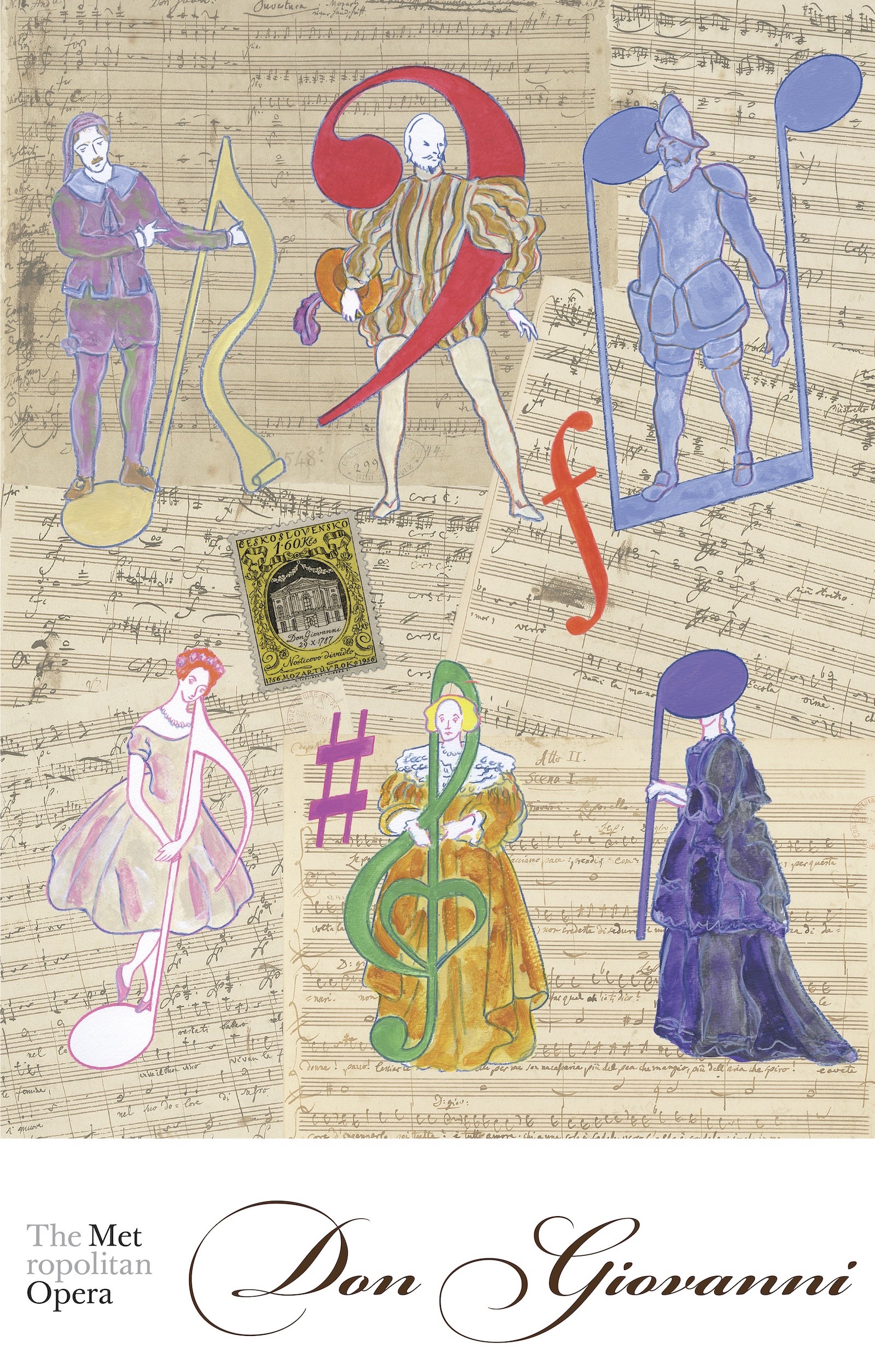 The characters from Mozart’s Don Giovanni interacting with musical notations. A bass clef encircles the title hero while Leporello, his servant, points to a list of Giovanni’s conquests. A forte sign heralds the Commendatore, Donna Anna masquerades with a quarter note, and Zerlina gives her hand to an eighth note. Donna Elvira is imprisoned in a heart-shaped G clef. The background features musical excerpts from Mozart's autograph score of Don Giovanni. 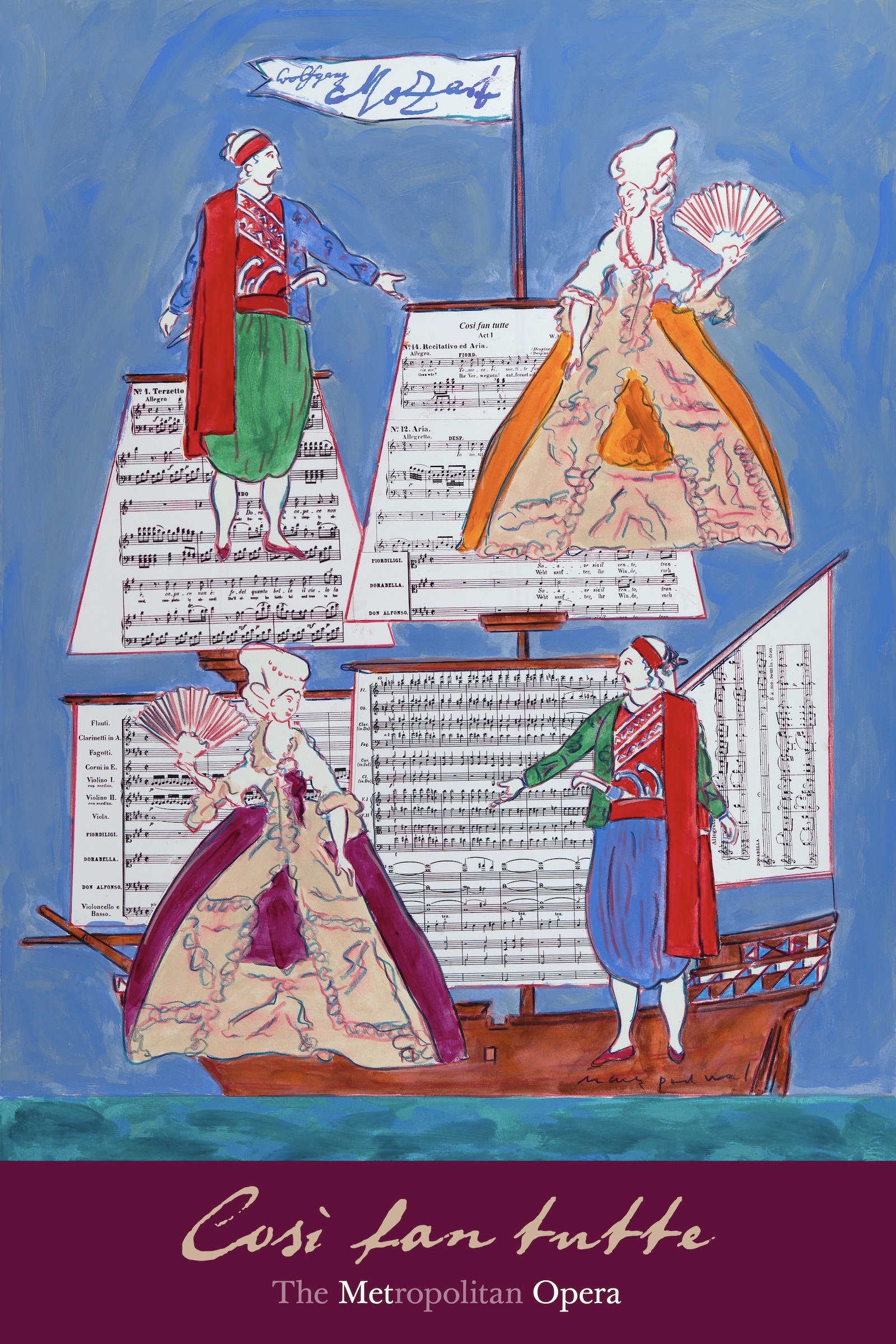 The four leading characters of Mozart's beloved comedy, with the men, disguised as moustache-wearing "Albanians," wooing each other's sweetheart. The troop ship's flag and sails feature Mozart's signature and musical excerpts from the score. 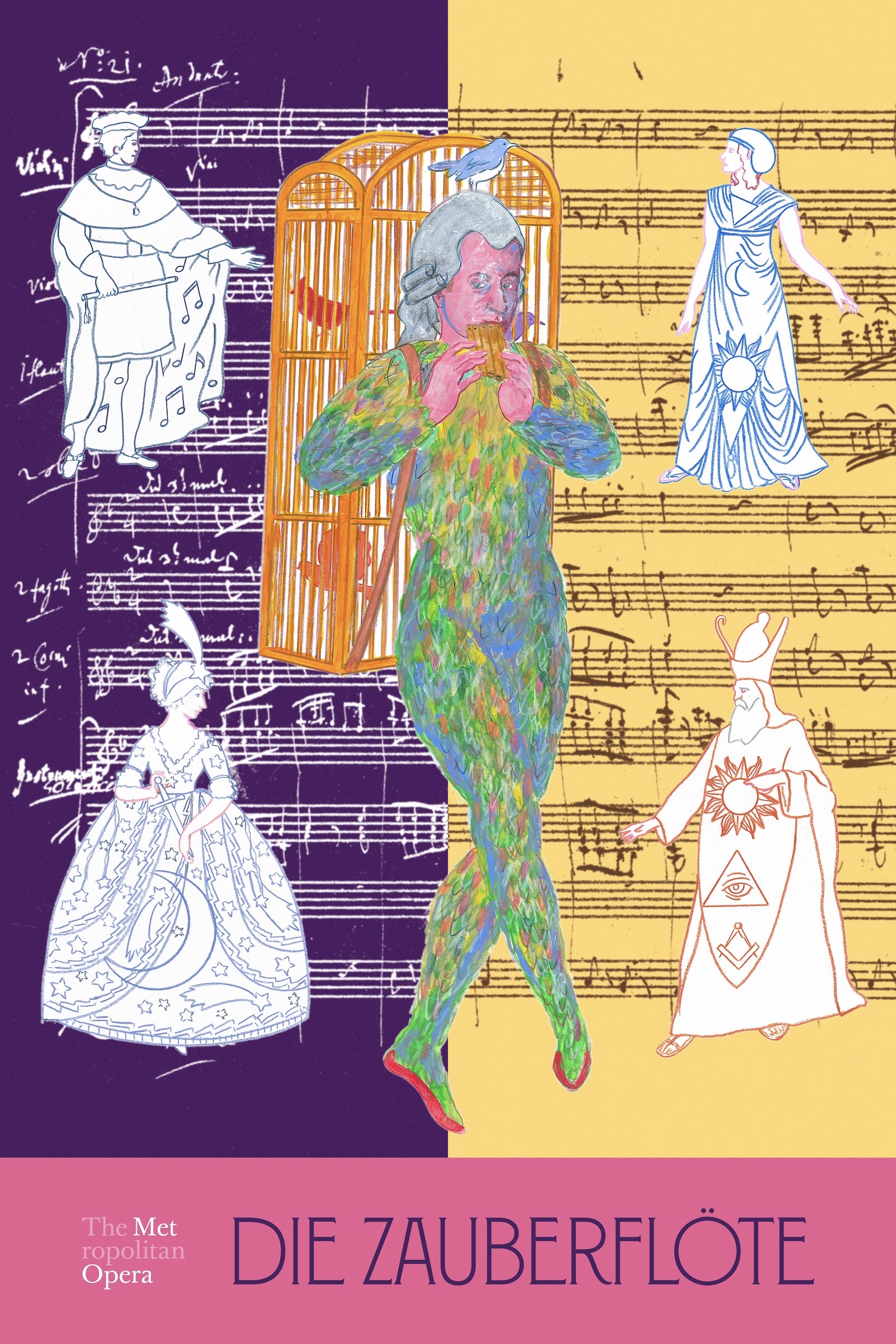 Costumed as the bird-catcher, Papageno, Mozart stands against a divided purple and yellow background of his autograph score, which alludes to the theme of darkness and light. The symbols on the high priest Sarastro’s robe refer to the fairy-tale opera as “an Enlightenment allegory, veiled in Masonic ritual.” 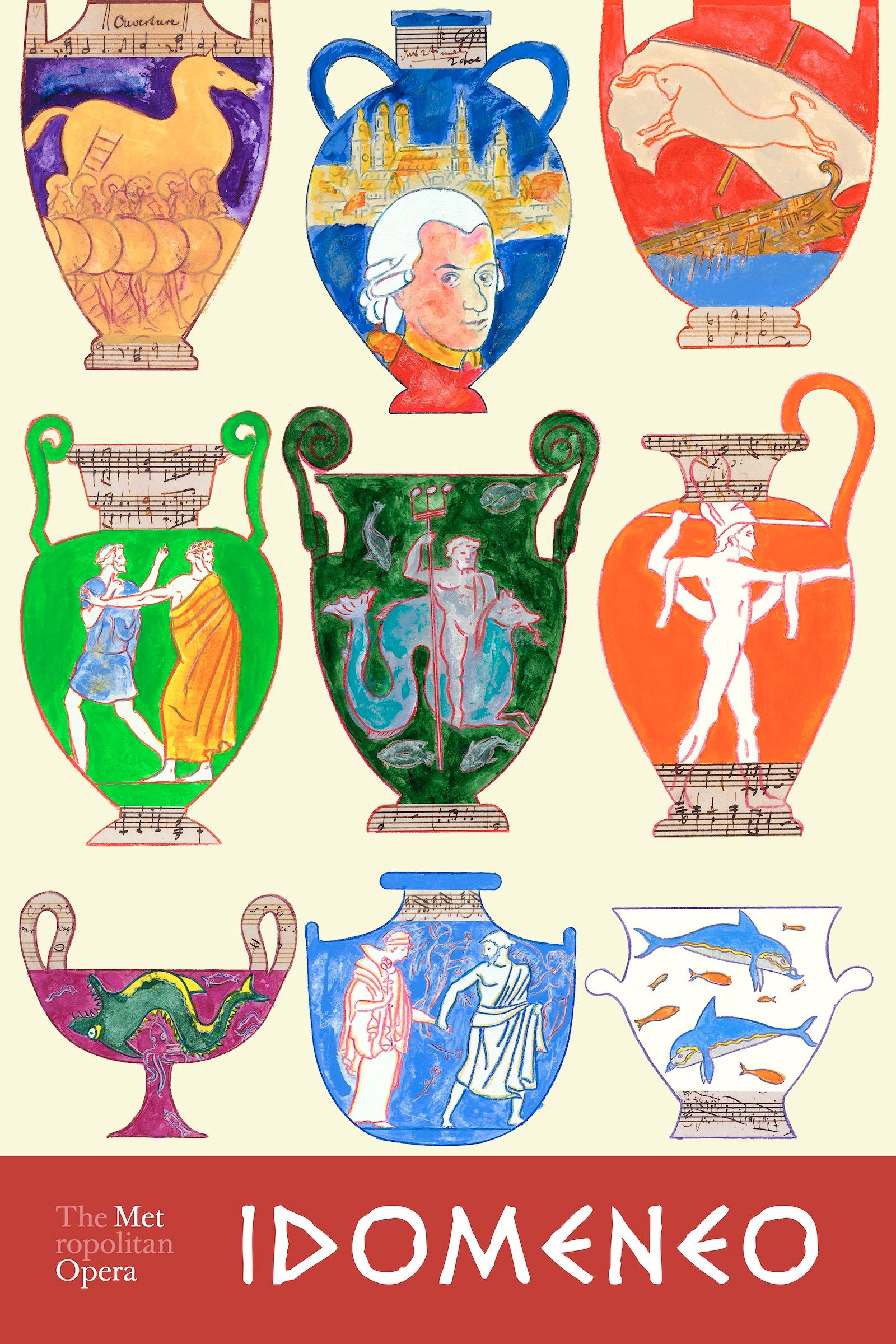 Ancient Greek vases decorated with the events and leading characters of Mozart's first operatic masterpiece. Musical excerpts from the score, in Mozart’s hand, adorn each vessel. 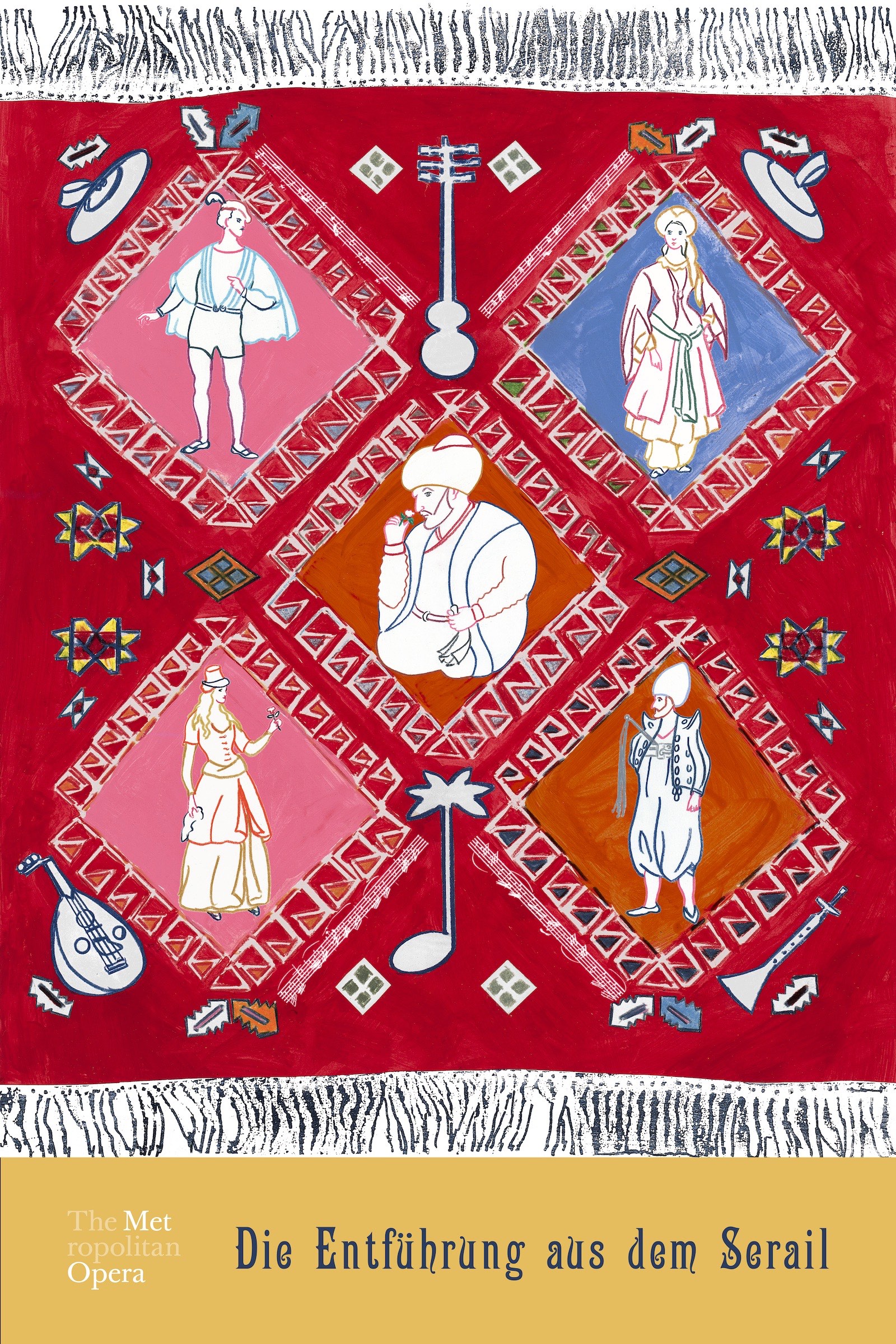 The Abduction from the Seraglio

Set in a Pasha’s harem and with a score inspired by Turkish military music, the opera appealed to the Viennese obsession with everything Turkish—a century after the failed Turkish siege of Vienna. After attending the work’s premiere, Mozart’s patron Emperor Joseph II is said to have remarked on the “extraordinary number of notes." 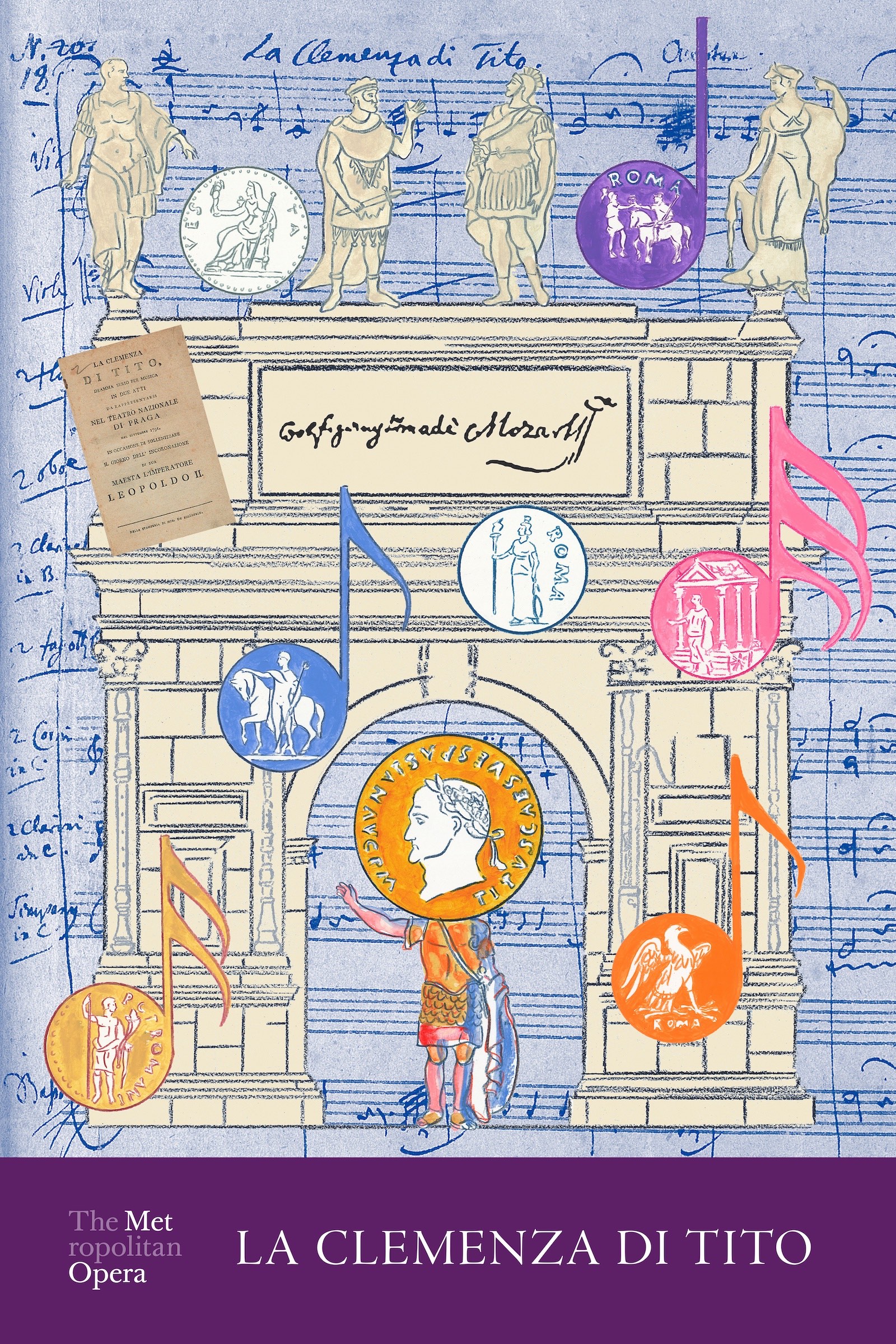 Rome’s grand Arch of Titus adorned with the opera’s leading characters and music notes rendered as Roman coins, superimposed atop the score for the work’s overture in Mozart’s hand. Collaged onto the arch is the libretto’s 1791 cover announcing that the premiere is presented at Prague’s National Theater on the occasion of the crowning of Leopold II as King of Bohemia. 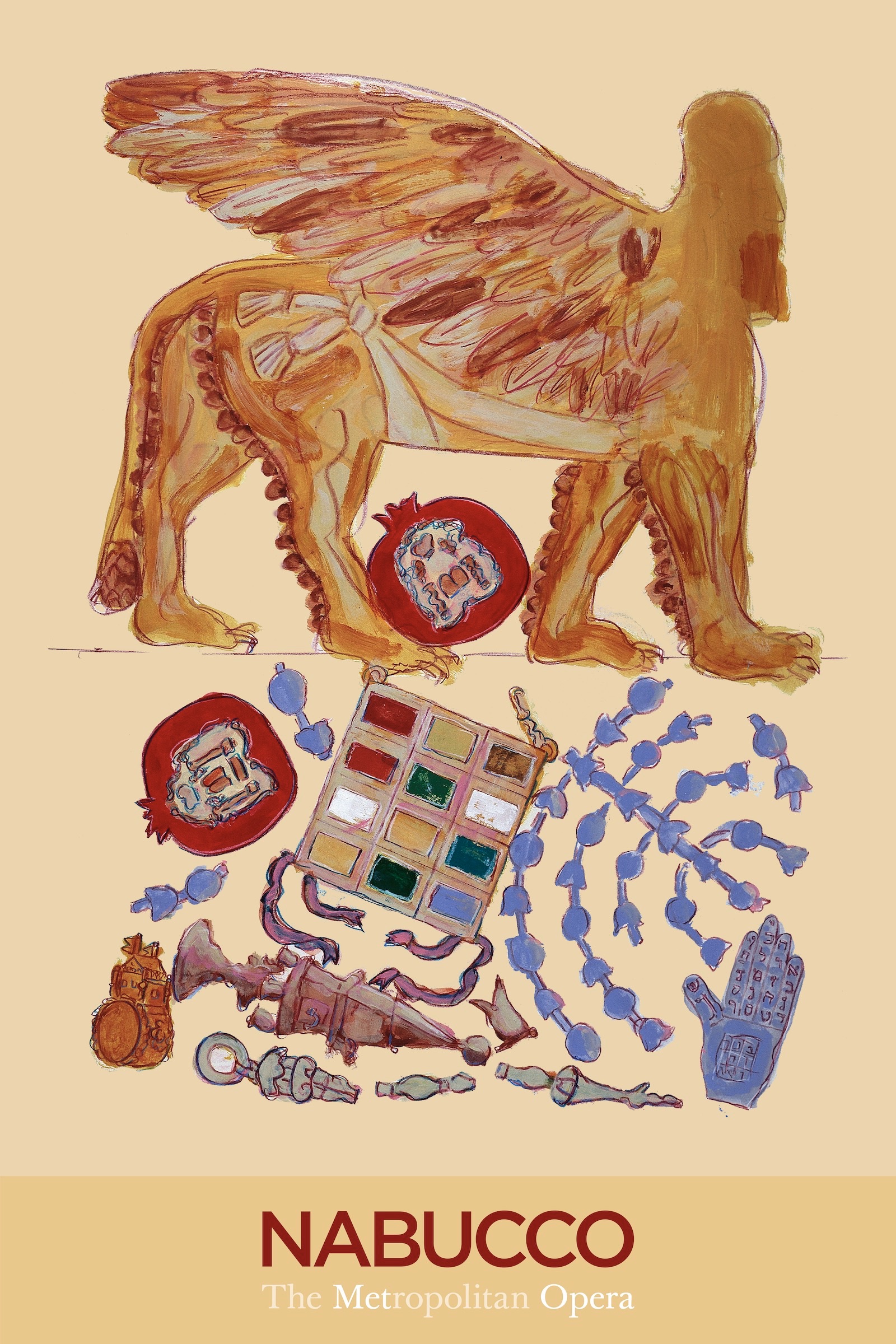 Nabucco is the opera that is considered to have established Verdi's reputation as a composer. The opera follows the plight of the Jews as they are assaulted, conquered and subsequently exiled from their homeland by the Babylonian king Nebuchadnezzar. 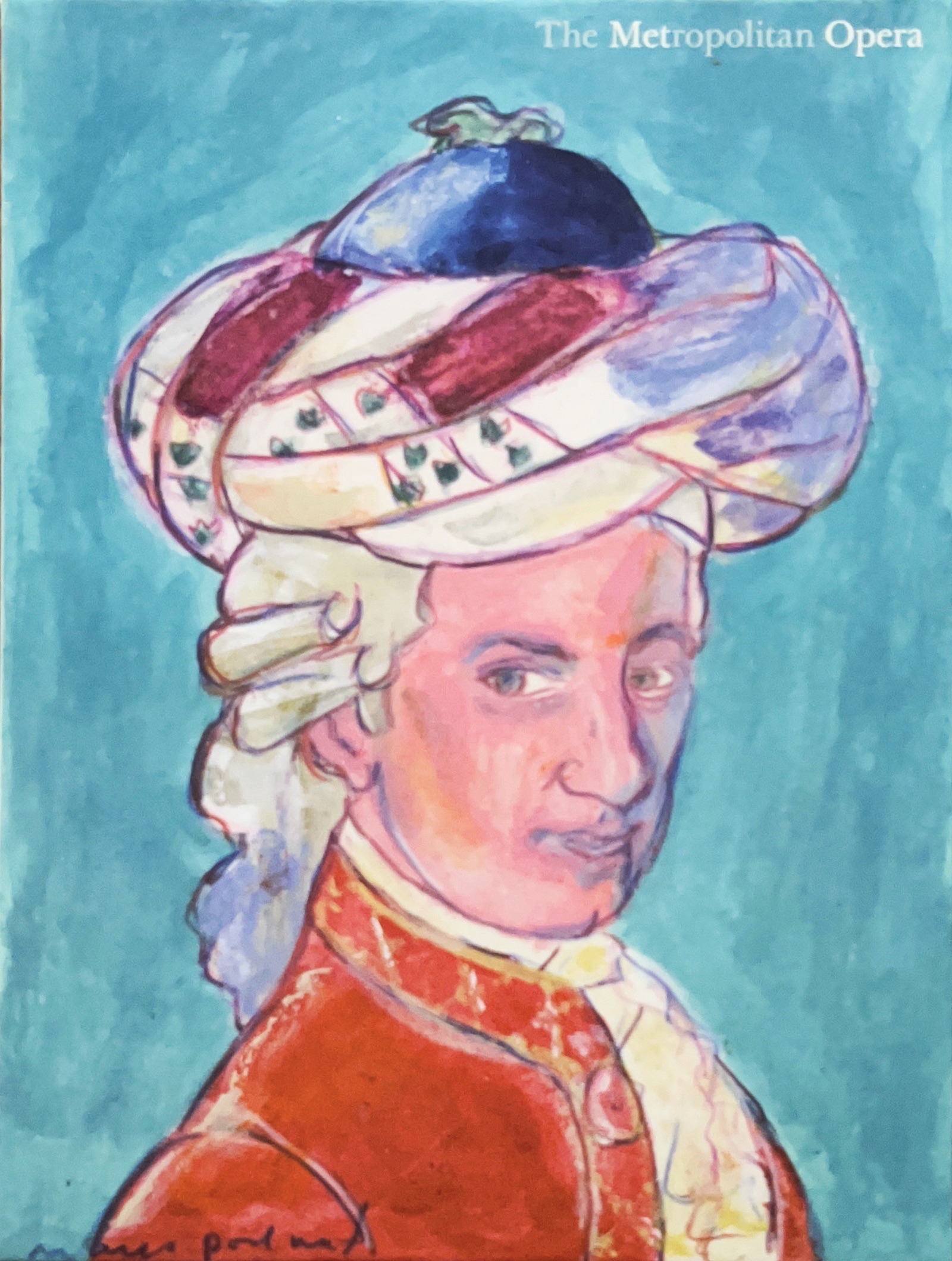 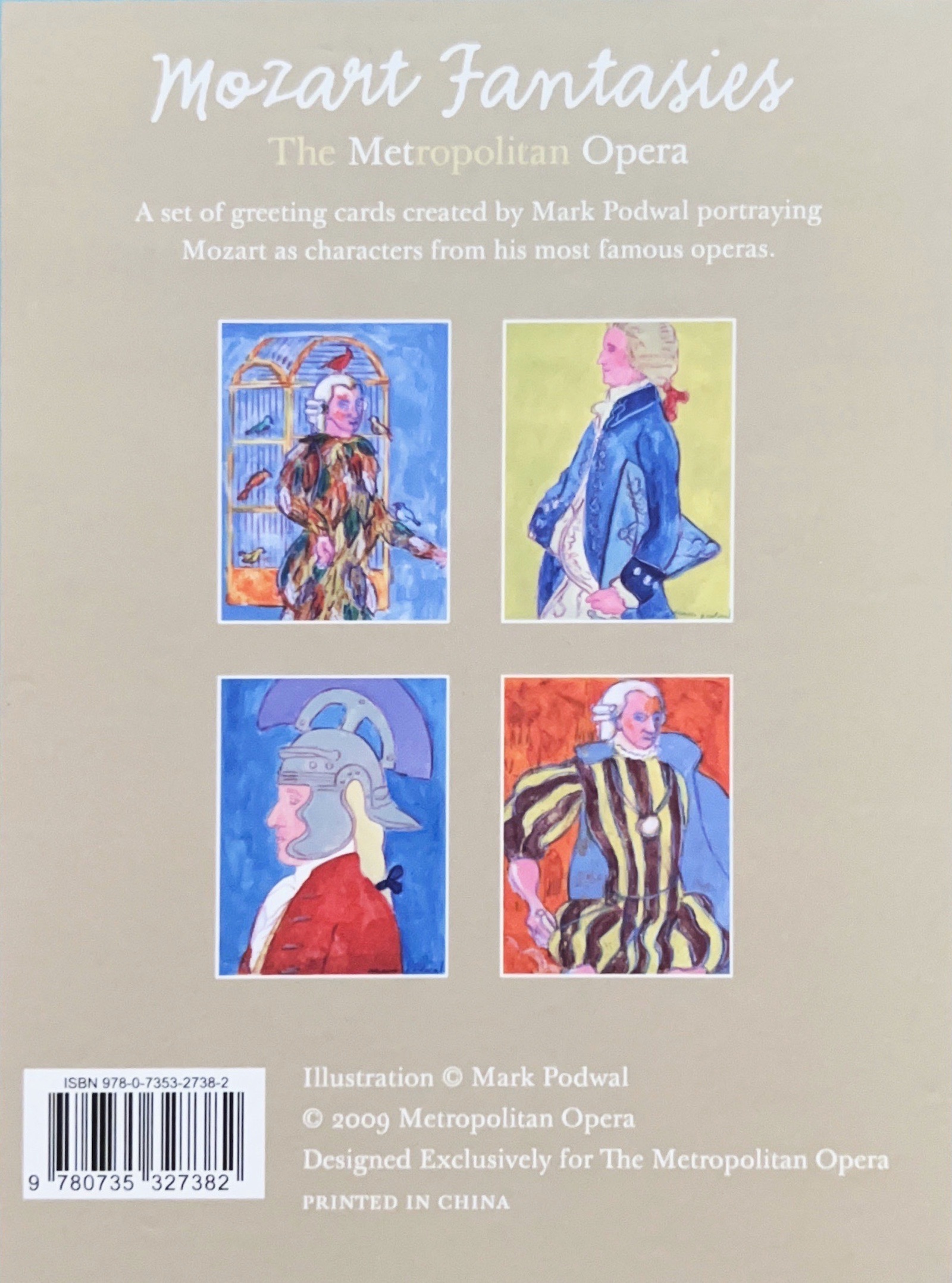 Podwal's set of notecards portraying Mozart as characters from his most famous operas. Images include the Pasha from Abduction from the Seraglio, Cherubino from The Marriage of Figaro, Papageno from The Magic Flute, the Centurion from The Clemency of Titus, and Don Giovanni.