The Czech “10 Stars Project” includes 10 synagogues and associated Jewish heritage sites, in 10 towns all over the Czech Republic in Úštěk, Jičín, and Brandýs nad Labem to the north; Plzeň and Březnice to the west; Nová Cerekev and Polná in the south-central part of the country; and Boskovice, Mikulov and Krnov to the east.  The sites have all been renovated (or re-renovated) with a mono-thematic exhibit installed in each to form 10 regional centers of Jewish culture and education. Podwal’s ten artworks, each imagining one of the ten restored synagogues, have been exhibited throughout the Czech Republic. 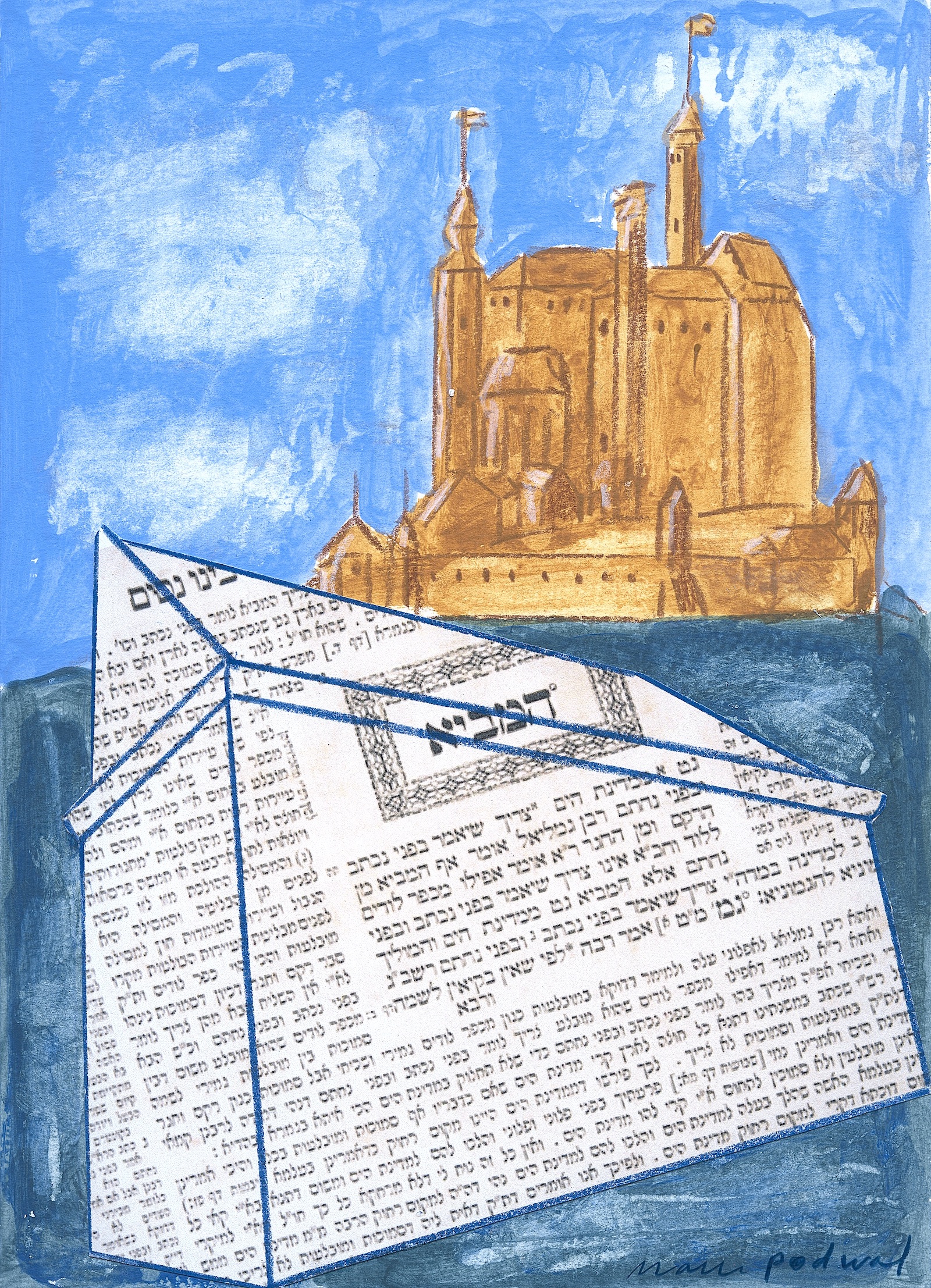 The Boskovice synagogue, near Brno in southern Moravia, was once a hub of Talmudic study. Built in the mid-1600s, its arches, vaults, and fluted columns were covered with both frescoes of Hebrew text spelling out prayers or names of congregants. There were curling floral motifs and painted architectural details typical of Moravia. The synagogue sat among the narrow lanes of the town’s Jewish ghetto, which by the nineteenth century had an estimated 2,000 inhabitants. The Boskovice synagogue was the only local synagogue to survive the most disastrous effects of World War II, but it still required conservation work. The synagogue received first-rate repairs in 2012–2013. In June 2014 it saw its grand opening and was opened to the public, housing an exhibition on Jewish Quarters throughout the Czech Republic. 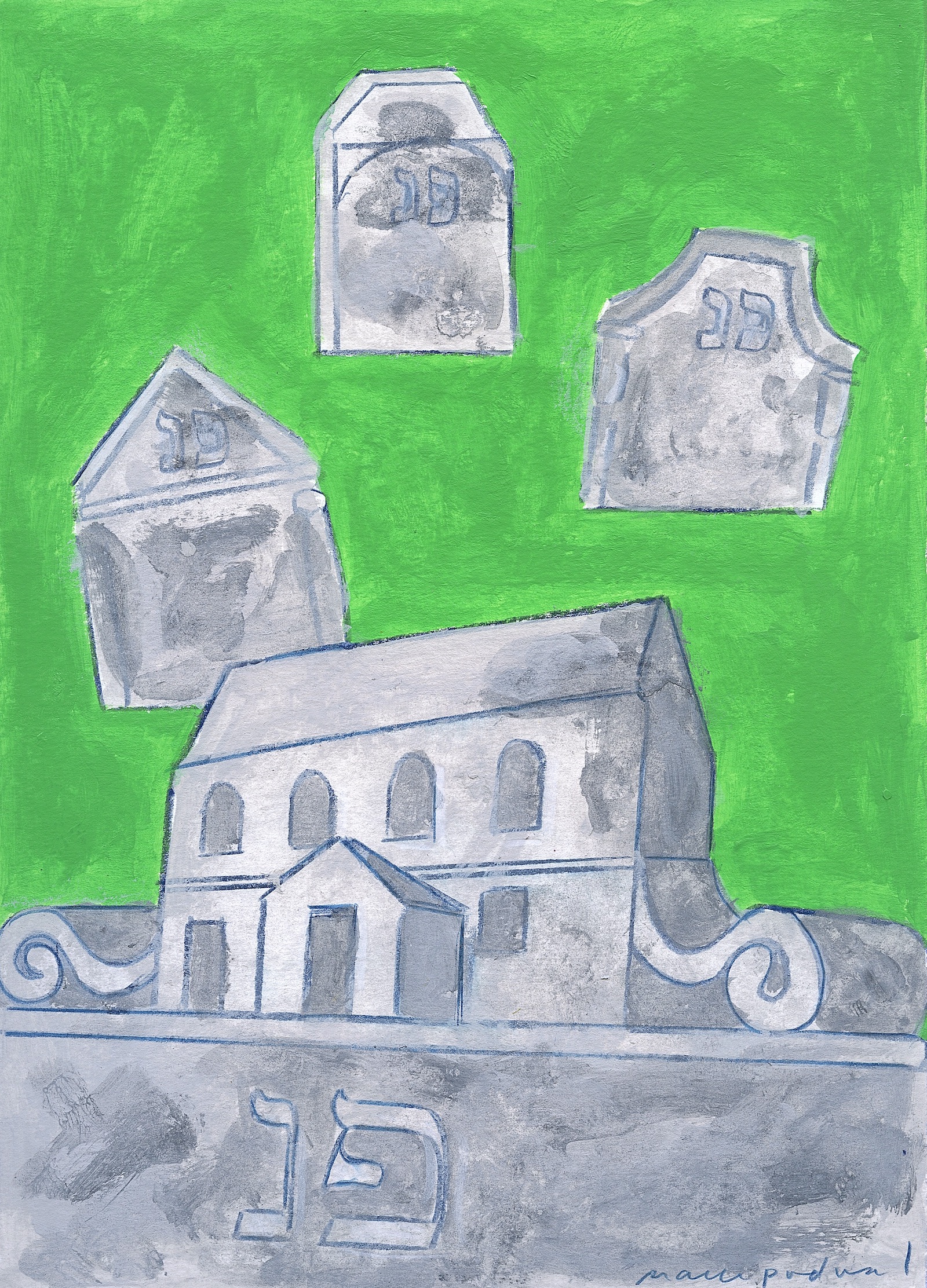 First mention of a synagogue in Brandýs dates back to 1559. The current synagogue was built in 1829 after one of many fires. In the 1950s the gallery and Torah ark were destroyed and the main hall reroofed and painted white to convert the synagogue into a warehouse. The reconstruction of the building is based on existing documents showing the original appearance of the synagogue and archaeological work that uncovered sections of the original murals, which were restored and replenished as part of the reconstruction project. 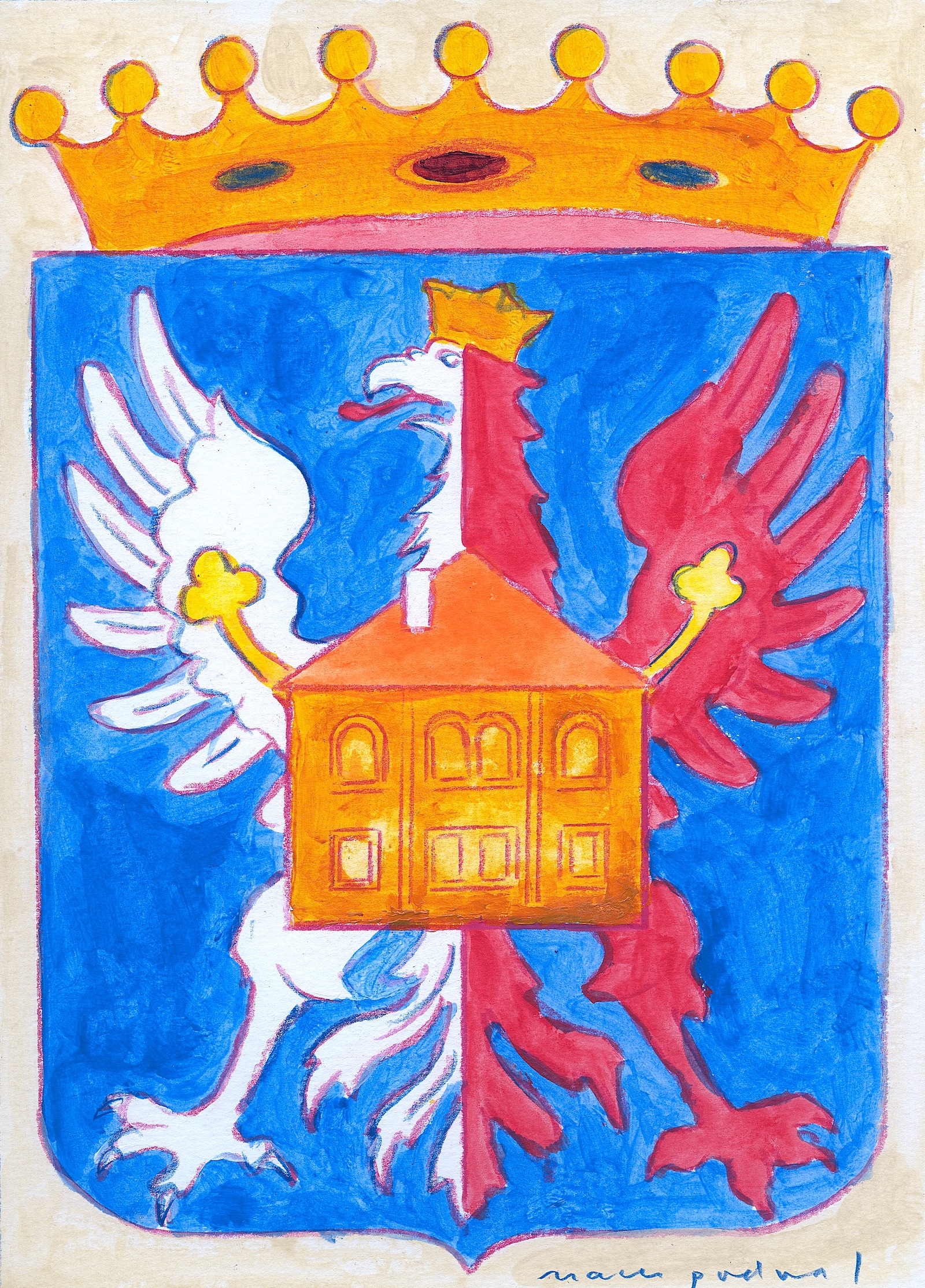 The synagogue was built in the middle of the second, larger, square in 1725. Following the destructive fire of 1821, it was rebuilt in its original size and form thanks to the help of the Count of Kolowrat. As a sign of gratitude, the Kolowrat family’s coat of arms was placed inside the synagogue. Above the Torah ark is a Hebrew inscription with the verse “Thou shalt love thy neighbor as thyself” (Leviticus 19:18). Services were held until the Second World War. After the war, the building was used as a storehouse. After the synagogue was returned to the Jewish Community in Prague in 1994, the building underwent extensive renovation works. 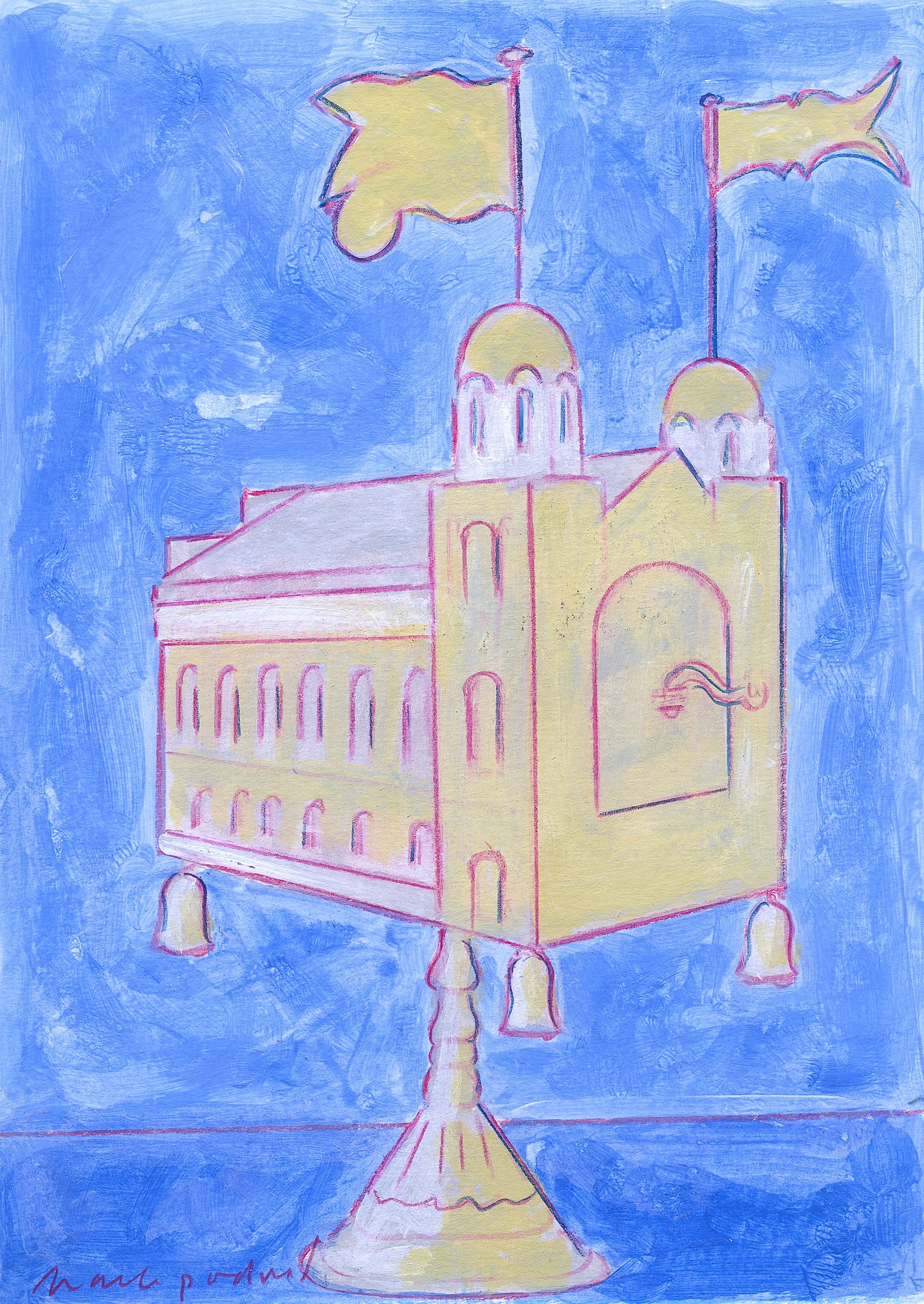 The Krnov Synagogue was one of the few in the Czech borderlands to remain untouched by arson during the autumn 1938 Kristallnacht. It is one of the three remaining synagogal buildings in the Moravian-Silesian Region. It was built in 1870–1871 on a site originally occupied by the city walls. The synagogue is a Romanesque Revival structure, with Byzantine elements that are especially visible in its two towers. The original interior was dominated by Moorish Revival elements, inspired by the buildings of the Sephardic Jews. While the Krnov Jewish community was not an Orthodox one, its synagogue did respect the traditional principle of separating visitors at services: men were on the ground floor, while women were in the gallery. The synagogue ceased holding religious services at the end of 1938, after the German army occupied Krnov. During World War II, the building served as a marketplace; and from the sixties to the nineties, it housed the district archives. Today, the restored building is owned by the Prague-based Federation of Jewish Communities in the Czech Republic. 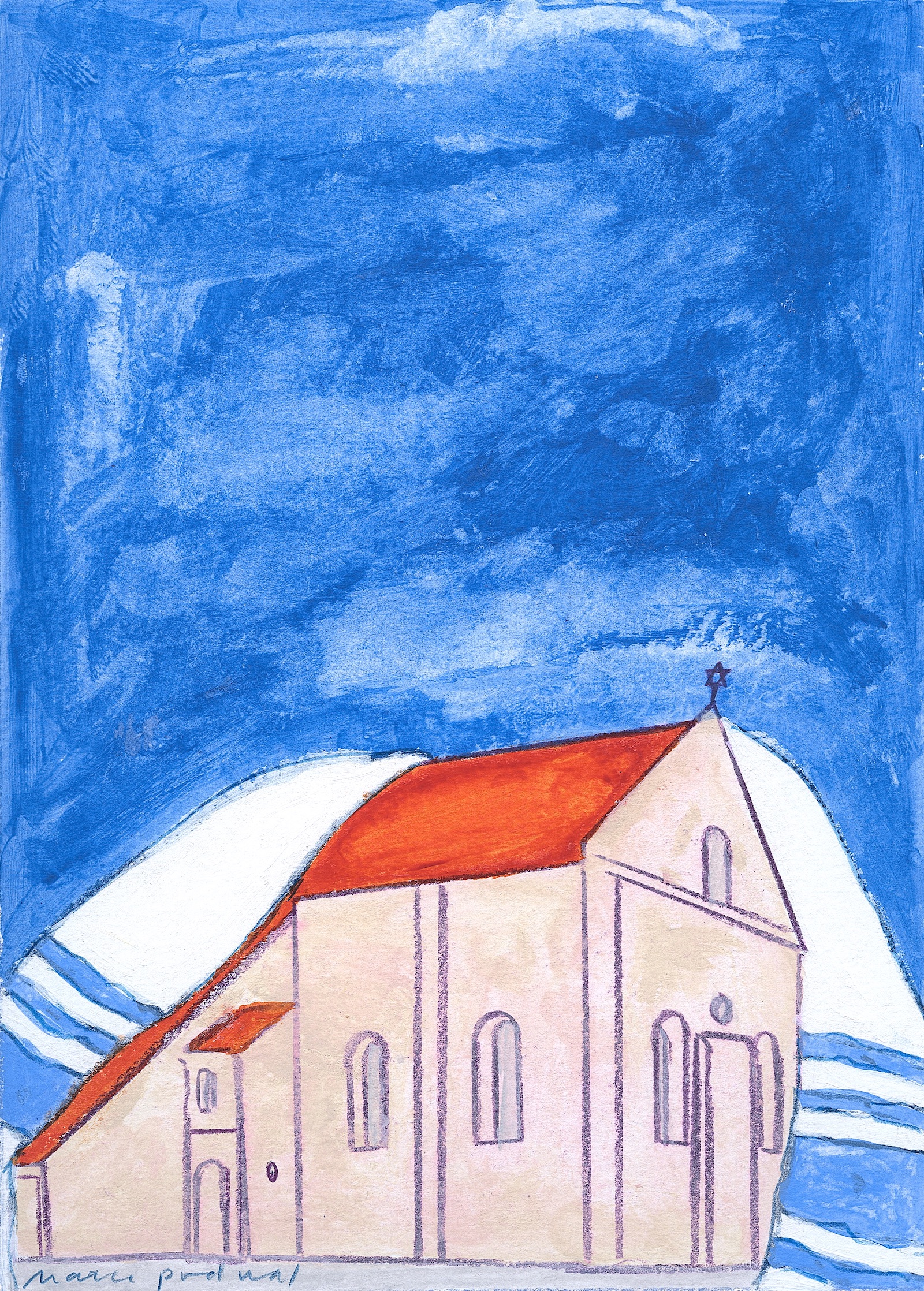 The Jičín Synagogue and The Jewish school

Construction of the Jičín synagogue was completed in 1773. The great fire of 23 June 1840 burnt the synagogue’s roof. Work was completed by the High Holy Days in September 1840. The synagogue is a small, exceptionally pure late baroque building with a high gabled roof. Inside are a vaulted ceiling with three pairs of lunettes, three tall semi-circular vaulted windows along the lateral walls and two on the gable walls. The high baroque Torah ark was allegedly taken from the church at the Jesuit College after its dissolution in 1773. The neo-classical wall decoration was restored during the synagogue’s renovation by the Jewish Community in Prague in 2001–2008. 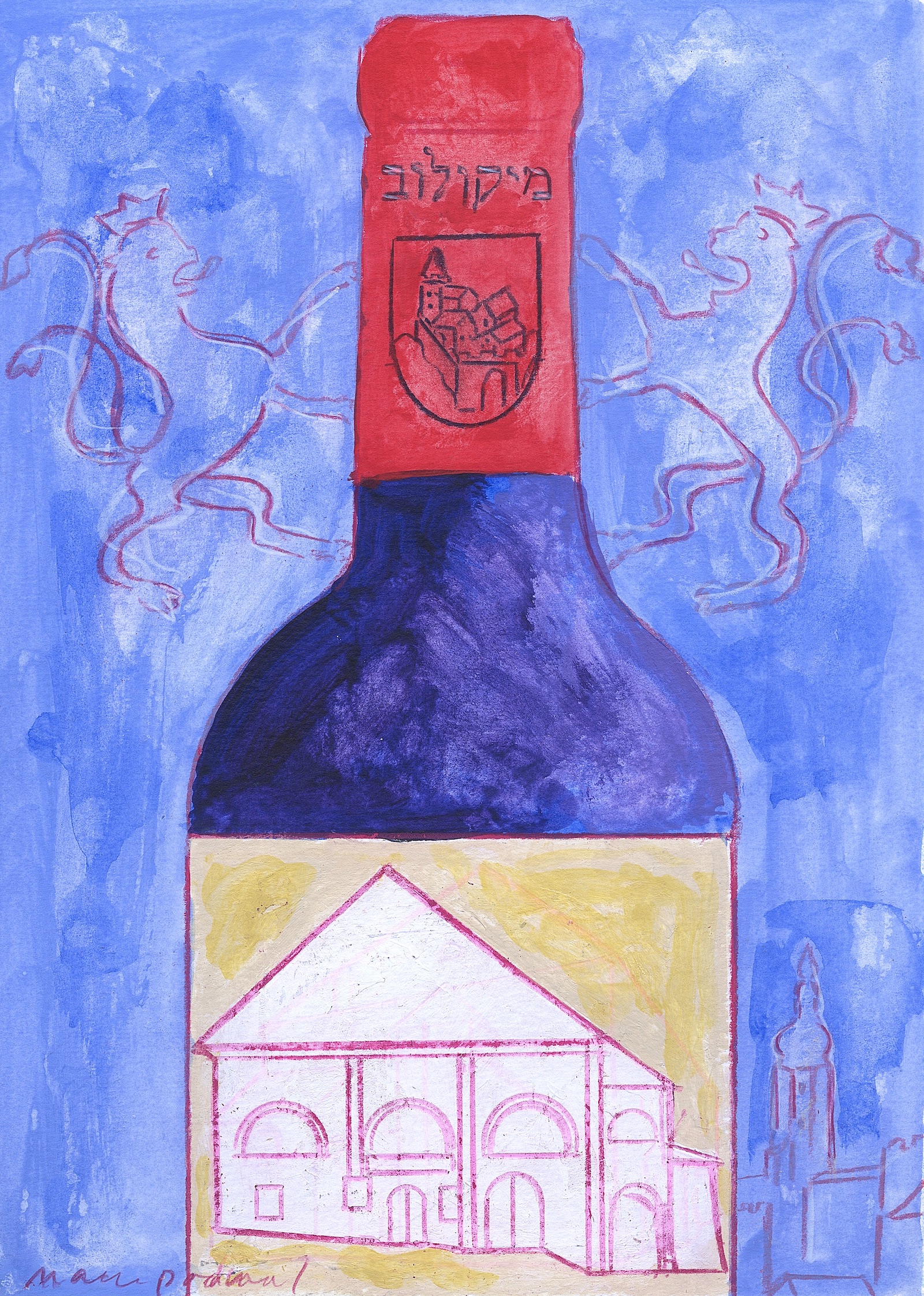 The most important Mikulov synagogue was the Upper Temple, or Old Temple, originally built in perhaps 1550 and expanded in 1689. Its current architectural look is the result of a 1719–1723 baroque renovation after a fire. The central layout – in which a set of four cupolas come together on a four-pillared column in the middle of the hall, with the column serving as the almemor (pulpit) – is based on Polish examples. It is the only extant four-pillar synagogue in the country today. The building deteriorated badly from the start of World War II onwards. It then saw demanding repairs from 1977 to 1989, and in 1995 began offering a museum exhibition on the history and historical sites of the local Jewish community. Today it serves multiple social and cultural functions as a museum, concert hall, and educational center. 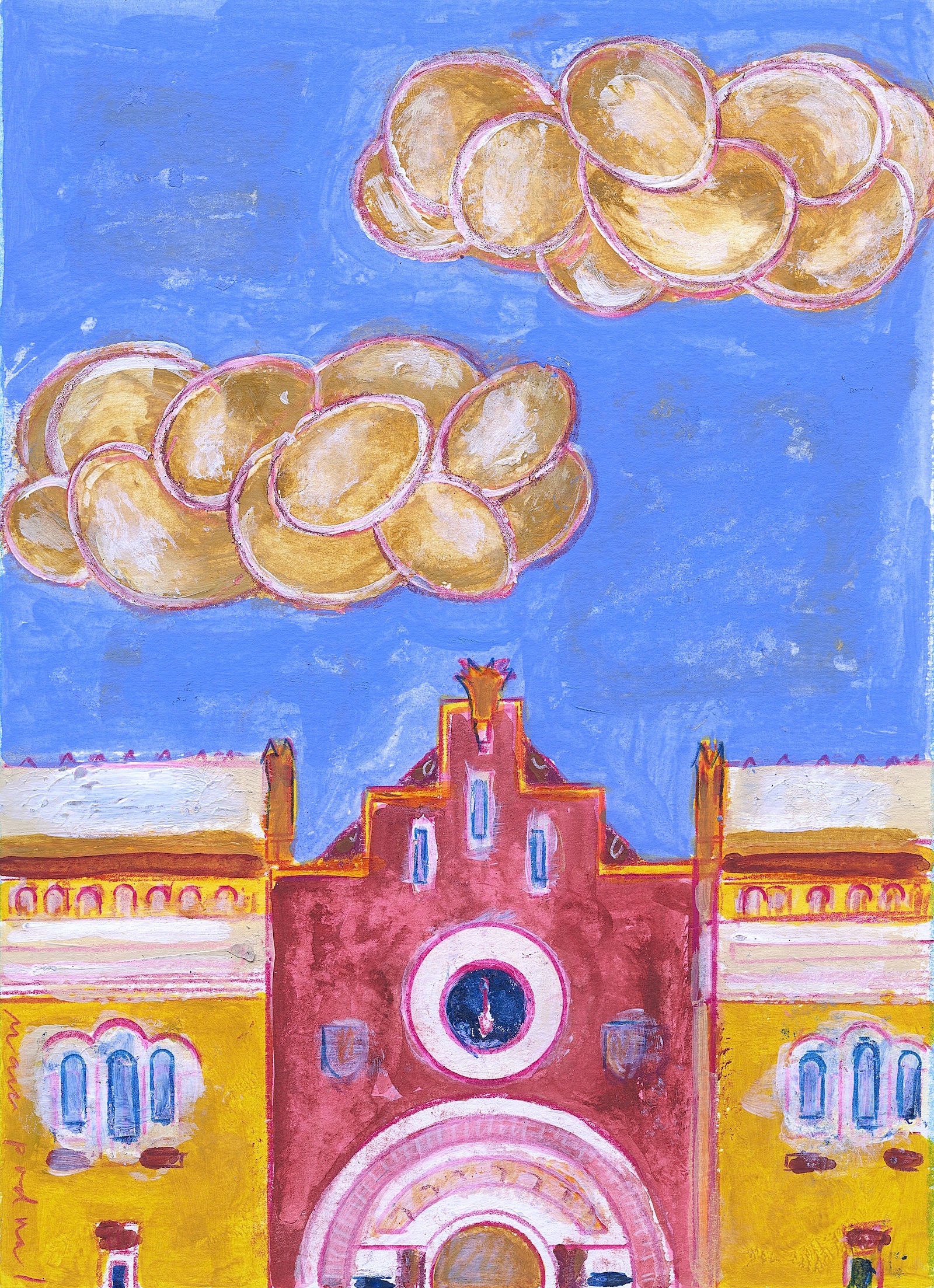 The local Jewish community established its first prayer house in 1693. The new synagogue was built in 1855 on the site of the former prayer house as a triple-nave building in the “Babylonian-Assyrian style.” It is a distinctive building in the style of early historicism with oriental elements, wide protruding towers with battlements, a clock on the western façade, and a five-sided eastern apse. It is a dominant landmark in the northern part of town, and together with the parish church forms the town’s distinctive skyline. After the war, the synagogue was used as a storehouse until 1990, when it was sold to a private business and continued to deteriorate. In 1997, it was bought by the Jewish Community in Prague, which began preparations for its preservation. In 2010–2014, the synagogue was completely renovated. 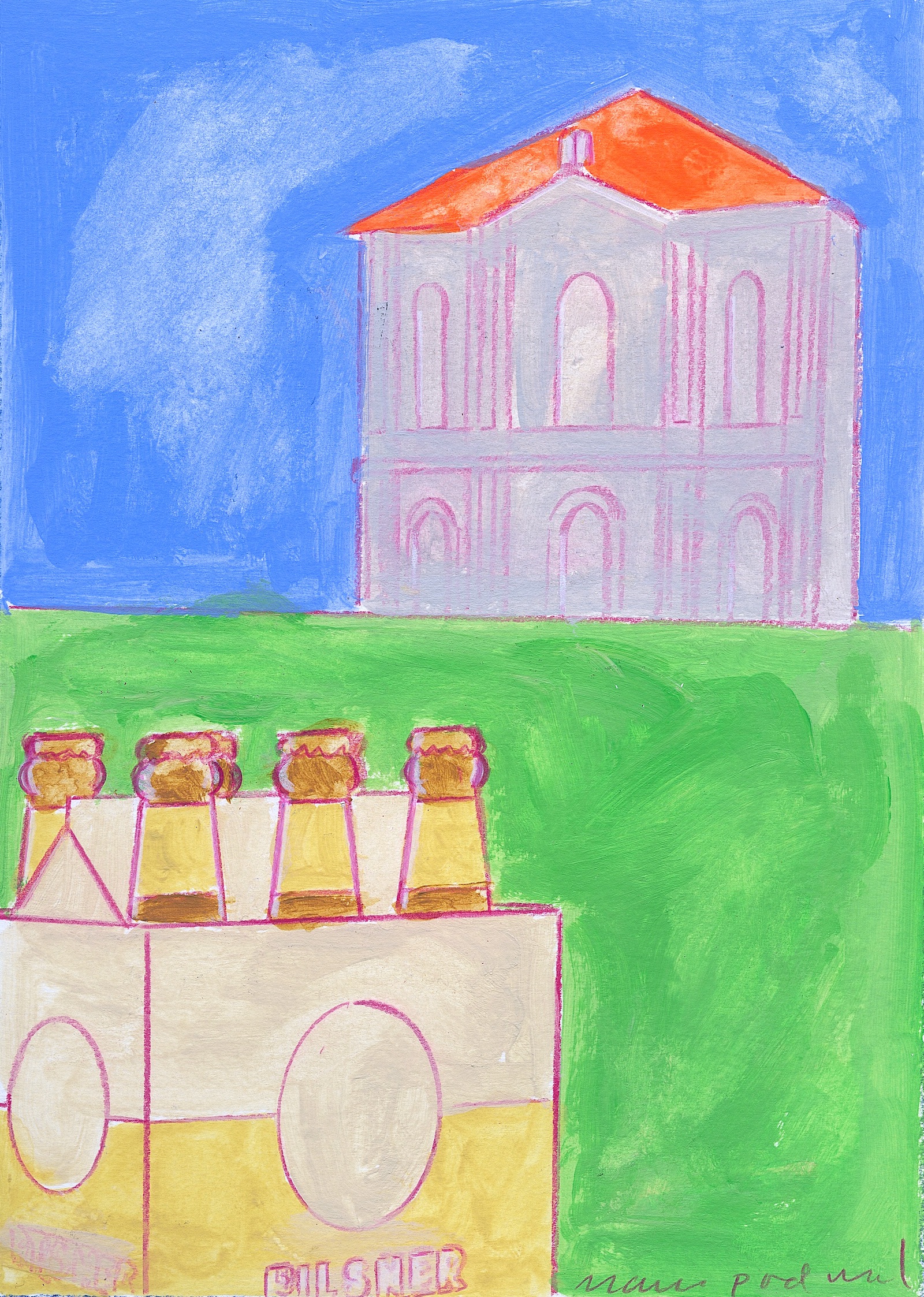 Plzeň’s neo-Romanesque Old Synagogue was built in 1859 in the gardens of the Jewish municipal house. Following construction of the Great Synagogue, the Old Synagogue was used only for occasional events. Today, it is an actively consecrated synagogue. In the 20th century, the Auxiliary Synagogue was used as a storehouse. Today only its outer walls remain; these were repaired and the building’s interior converted into a monument to Plzeň’s victims of the Holocaust – a garden with the victims’ names written on stones. 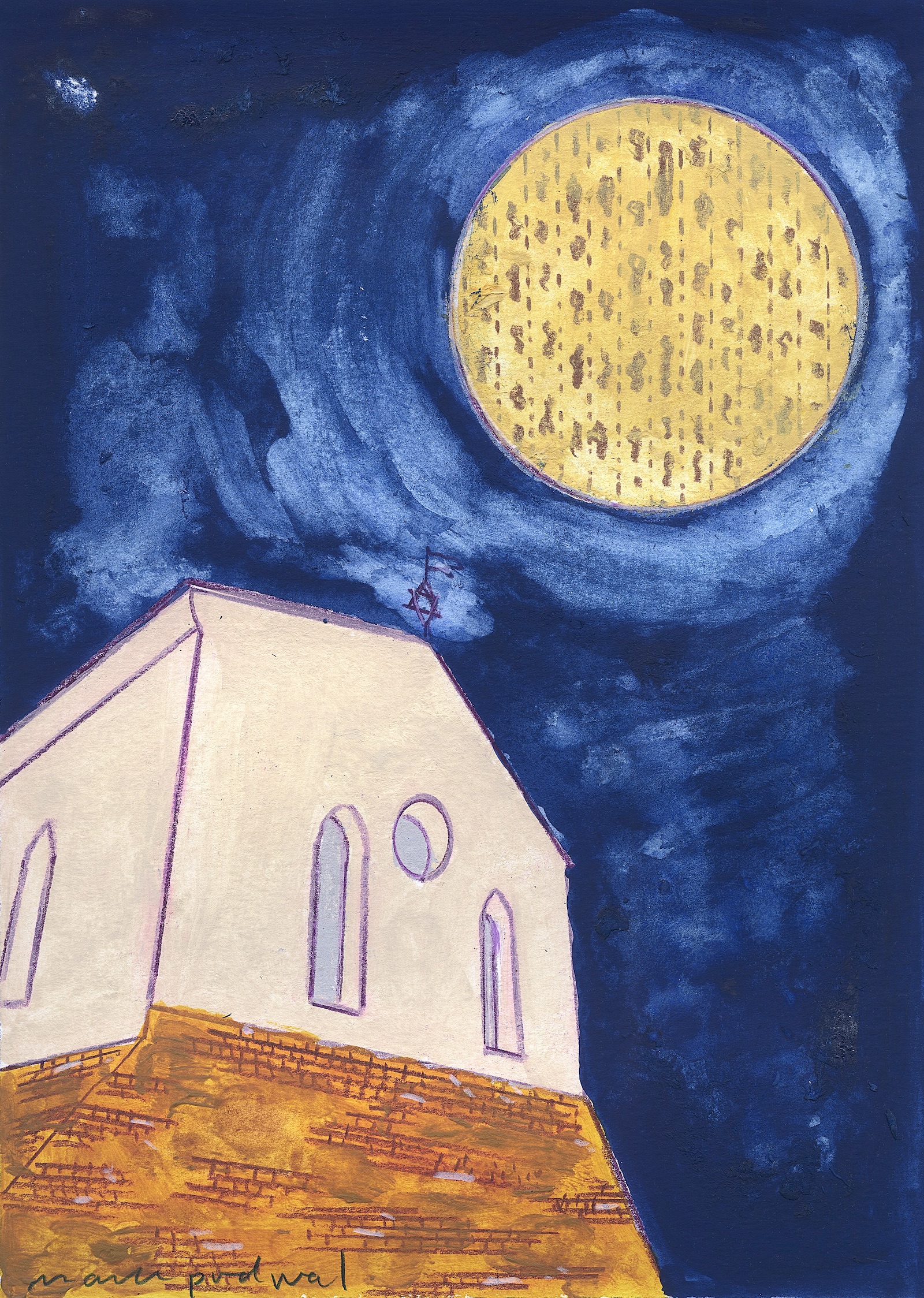 After creation of the Jewish Town, in 1684 the authorities built a new stone-and-brick synagogue. In 1861 the synagogue was significantly modernized: the old vaulting was torn down, the walls and ceiling raised, a new women’s gallery constructed with a stone staircase, and the interior was decorated with wall paintings featuring Gothic tracery. In 1717, the Jewish community built a two-story rabbinical house next to the synagogue, which incorporated an older ritual bath in the basement. From 1785 to 1850, the building also housed the local Jewish school. Services were held in the synagogue until the fall of 1941, after which the interior furnishings were destroyed and the building used as a warehouse. After the war, the synagogue continued to be used as a storehouse and deteriorated. The roof collapsed in 1969, but the building’s planned demolition was never carried out. In 1994, the Polná town council transferred ownership of the synagogue to the Federation of Jewish Communities. 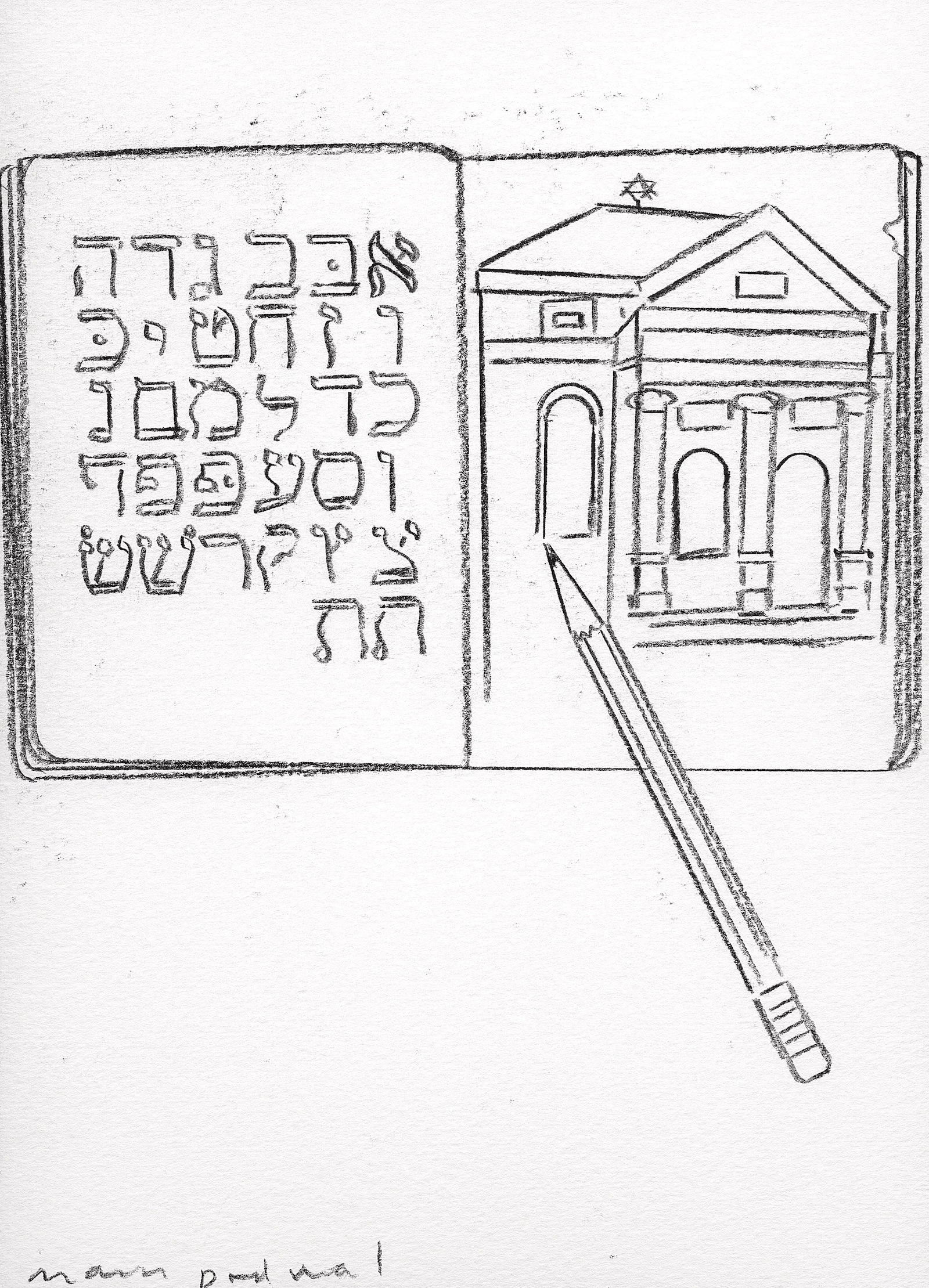 The great fire of 1773 destroyed a wooden synagogue of unknown age. After the fire, a wooden school was built at the end of the Jewish street. In August 1794 the Jewish community asked the town for the donation of quarried stone for the construction of a new synagogue on the site of the school. The unconventional neo-classical tower-like structure, built on a square foundation, was completed that same year. Unique features are the classroom and teacher’s quarters located in the buildings basement. The synagogue’s interior furnishings were destroyed during the war. Later, the building deteriorated, the roof collapsed, and the building was slated for demolition. In 1993, it was taken over by the Federation of Jewish Communities, which renovated the building.